This post is on a sad subject. I don’t like to dwell on the empty half of the glass when there’s so much good going on, but sometimes bad things must be brought to light.

As I’ve come to terms with being transgender, I’ve become increasingly aware of the plight of other women in today’s over-sexed world. You see, transwomen struggle with much of the same crap, sometimes on even deeper levels. Not to play a violin – and certainly not to one-up the horrible way natal women grow up in a culture that treats them as sexual objects – but the fact is that in many ways transsexual women have even more to endure. Their dignity is attacked from a thousand different angles by pure human objectification. They are assaulted by the lies that attack womankind, but with an extra brutality and in monstrous forms specific to the transgender world.

There is a universal animal viciousness against transwomen. Their dignity is attacked every day by indignation and judgement from transphobic people, and then by sexualization and objectification often coming hypocritically from the same people. They are told on one side that they’re perverts, and on the other side that they’re good as nothing but the objects of everyone else’s perversions.

Don’t get me wrong: there is so much good happening in society on behalf of trans people, and so much beautiful courage among the suffering individuals. However, there’s a dark side to the transgender world that must be exposed.

Of course the most obvious way in which transwomen are attacked is from being caught – like natal women – in the crossfire of society’s all-out war against genuine beauty. I suppose it’s always been the case that society quantifies and qualifies beauty until women become like statues on display, compared from every angle to determine if they are “of good enough make.” The turning of feminine beauty into a commodity is not historically new, but the current staggering scale of it is a veritable revolution in human dignity (or lack thereof). The media has allowed an unprecedented marketing of false beauties, and the wonders of Photoshop have made the lies bigger and bigger. At least in ages past the ideal woman actually existed. Now not even supermodels can live up to the standard, which doesn’t even exist outside some squinty-eyed designer’s hard drive.

Transwomen have enough to deal with regarding their self-esteem and body image. By nature their lives are already pitted in an endless struggle to have their external beauty properly express their inner beauty. Natal women might complain about weight around their thighs, but at least they don’t have a beard!

It’s hard enough for a transwoman to feel that she is meeting the bare minimum standards of femininity, much less the ideal. Not only does the transwoman have to fight to be read as female, but she must then fight the endless battle of being the perfect female.

The hard thing is to not internalize the struggle. Transwomen are raised in the world of men, where they are often taught alongside all the cisgendered males that women are nothing more than sexual objects. A male-to-female transsexual, feeling like a woman on the inside, needs to be on guard against internalizing this lie. Since transwomen are usually already ashamed of their inner femininity, and since the male world in which they are raised tells them that all things feminine exist only to serve sexuality, it is easy to turn that sexualization inward toward their own souls. I believe this is why some transgender people struggle with autogynephilia – the eroticization of their own feminine self-image. A natal woman’s feminine beauty is both internal and external – her external beauty is attacked first, and eventually the lies work their way inward until she feels worthless. For a transwoman who has not transitioned, her femininity is only internal, so the lies go straight to the heart.

The problem lies in the language we use. The word ‘transsexual’ reads like ‘pansexual’ – the assumption is that it must be about sexual intercourse or sexual behavior. The ‘sexual’ in ‘transsexual’ obviously refers to the other meaning of sex: male or female. However, that’s not how it reads to the uninformed. The word takes on a kinky vibe that’s unhelpful to say the least.

This leads me to the next major injustice against transgender dignity:

The Plight of Transsexuals

The hard-core sexualization occurs when transsexuals ‘come out of the closet’ and begin to live their owns lives. They often start from scratch as many are  kicked out of their homes and fired from their jobs for their troubles. Homeless and jobless, many transsexuals find themselves alone and in search of a place to fit in.

Discrimination leaves many without a respectable corner of society to settle in. Most jobs are closed to them by dint of their gender variance, and often their only housing option is a homeless shelter. General social stigma adds to the pressure. As many women do when faced with no opportunities for work or shelter, some of these transwomen turn themselves in to the sex industry.

This is the plight of transwomen in the Western world, where there is little to no real community for trans individuals. However, even in eastern countries where transgenderism has an established place in society, the situation is far from good. India still preserves the tradition of a hijira caste, hijira being a community of eunuchs, intersexed and transsexed individuals who are often taken in after being driven from their homes. 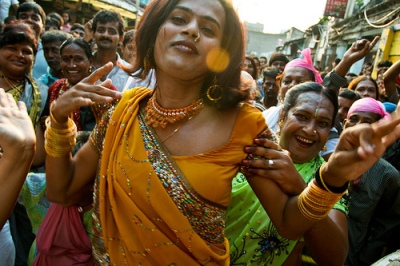 A hijira festival in India.

On one hand hijiras have a respected place in Indian society; old traditions and ancient reputation credit them with special religious significance. Sometimes hijira become ceremonial figures or the givers of blessing. However, despite their occasional spiritual use, in modern times most face extreme ostracization. Job opportunities for hijira are non-existent; they are expected to earn their bread by sex work or begging.

The Dark Side of “the Wild Side”

The sad thing about these unrealistic, over-sexed expectations is they often become self-fulfilling prophecies.

Consider that if someone is falsely accused of being a ‘sexual pervert’ day in and day out, chances are they will at least internalize the shame of being sexually perverted, if not also feel doomed to a certain lifestyle. When people are expected to perform at the lowest possible standard, rising above that standard requires extreme personal effort going against the grain of everyone else’s dismissal. If the world says you have no worth, it’s easy to begin to think “well, as long as my body/soul is worthless, I might as well sell it and have something to eat.”

The point is that transsexuals sometimes become what they are expected to be, not because it’s in their nature, but because they are fulfilling what the world expects of them. Many transsexuals pass from one extreme of pleasing society – pretending to feel and think like the gender they were assigned at birth in order to fit in  – to another extreme: feeling trapped in the seedy side of the world.

There exists an underworld trans culture in which poor and dispossessed transsexuals band together to scratch a living off what society will allow them. The values of this underworld – the very false assumptions that help push transsexed people into such a low place to begin with – are then picked up and culturally disseminated through songs like Lou Reed’s Walk on the Wild Side (or the movie Hedwig and the Angry Inch) and become the mainstream view of transsexuality.

Dr. Stefan Baral, the doctor who headed research on the HIV statistics, said to the press: “Never mind LGBT equality. There has been very little movement toward trans equality [in the U.S.]… Stigma is universal, how it plays out is universal; that to some extend is one of these emerging messages.” As Miss Major, executive director of TGI Justice Project, says in an article from hivplusmag.com:

Medical professionals, police officers, and even gay and lesbian communities “go out of their way to crush us so that we feel ignored and rejected, and that our wishes and desires don’t count,” Major says. “There is no care for who we are and what we do.”

The social situation some trans people begin with is not good, the situation they are pushed into is worse, and the support afterward is non-existent.

Once again, it’s not that the universe is all bleak for trans people. There’s amazing beauty and hope among us, and the world is changing for the better. However, something’s still gotta give.

Hope For Something Better

Thankfully the future is brighter than it’s ever been for transgender people. The world is ripe for the harvest. There’s an endless amount of work to be done, but so many brave souls are already laboring in the field.

A group of hopeful and inspired trans people have banded together as We Happy Trans* (and on the LGBT site “It Gets Better” Project) to talk about the joys of being transgendered. Trans vloggers like those of the TransByDef Youtube channel are giving transgenderism more visibility, showcasing the normal lives of real trans people and helping eradicate the sexualized stigma.

Based on state and local non-discrimination laws, 47% of trans people are now protected from unjust employment discrimination. This is an unprecedented step forward.

The general population is now more educated than ever about intersexed and transsexed issues. For one of the only times in Western history, the existence of such people is actually acknowledged and taken seriously.

However, there’s still so much work to be done. Healthcare discrimination still needs to be eradicated. Job discrimination is still a major problem. More shelters and support centers need to exist to provide safety nets for victims of discrimination.

With the problem evident before us, we need to take practical steps forward. Sober education, loving ministry, and honest dialog need to pave the way to a better future. Let’s begin with changing how we think: transgenderism is not about sex, it’s about identity. It’s about a search for dignity, a cry to be loved. Let’s start by seeing that need and filling it.

For more thoughts on this subject, read Julia Serano’s “Stop Sexualizing Us!” and Shaker Alexmac’s ‘Trans-sexualization.’

One thought on “The Sexualization of Transwomen”